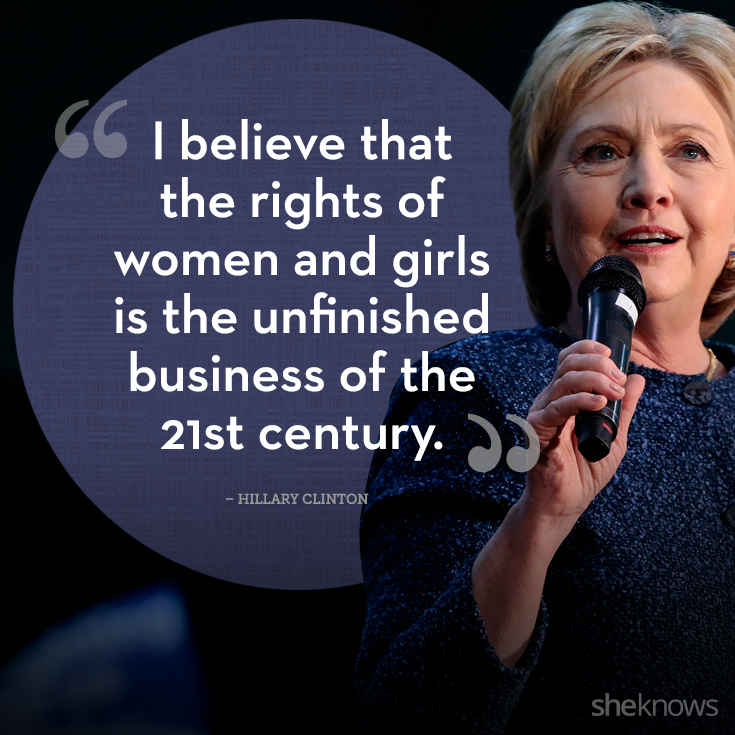 This post was inspired by the recent political events in the 2016 US election. It would be hard to say otherwise. However, I’m hoping the message here is for everyone (men and women), not too controversial, and lastly, makes you think. The way women are treated affects everyone, whether its personal or perhaps someone in your life, either at home or at work. I think it is all of our responsibility to work to cultivate an environment of acceptance, tolerance and equality in this world.

We cannot succeed when half of us are held back. Malala Yousafzai

There can be little doubt Trump ran a campaign with lots of hatred. He called women fat pigs, slobs, bimbos. He called breast feeding ‘disgusting’ and called pregnancy a ‘burden’. He’s a proud adulterer. On a few occasions he bragged about his sexually aggressive unwanted advances and most everyone has heard the now famous ‘grab ’em by the p*ssy’ quote. What made me more sad was the fact that men (and women!) actually voted for this man, and by doing so, I think validated his behaviour towards and treatment of women which is very worrying.

You don’t have to be a female candidate on Trump’s Apprentice to have faced sexual harassment in the workplace. Many question why more women don’t speak up, in or out of work. I challenge that if someone can become president of the US, who has bragged about unwanted predatory behaviour, someone facing allegations running in the double digits, it gets a bit easier to explain why. If you don’t believe me, ask your spouse, or your friend or a colleague if they have ever experienced outright harassment at work. Justifying this behaviour as ‘boys will be boys’ or ‘locker room talk’ is despicable and a real barrier to equality.

Being a woman isn’t easy. Being a woman in business is not easy either. There’s the well documented gender pay inequity and lack of women in senior management positions. The latter creates a lack of role models and mentors which makes it rather intimidating for women to strive to those heights. Additionally, often the same behaviour from men and woman can have double standards.  Women can be called demanding, men just have ‘high expectations’. Behind people’s back women are often referred to as a ‘bitch’ if they are aggressive, to which I can’t even recall what the equivalent sentiment levied towards men would be.

What is easy? Being a feminist. Thinking that women deserve the same opportunities, respect and rewards as men. Any man who thinks feminist is a ‘woman thing’ and no man could be a feminist truly doesn’t get it. Feminism doesn’t mean women are superior, quite the opposite. Its about CHOICE. If a woman chooses to be CEO of a multinational company, that should be her choice. If a woman is lucky to have the option to stay at home with her children, then that too should be her choice.  A woman should have the same opportunities and choices, no matter what they are. Being a feminist is not about being a man, its about having options and choice. Its about not putting down other women, not tolerating when women are viewed as inferior, teaching young girls to chase their dreams and mentoring young women to excel in their careers.

I wanted to comment on a couple books about empowering women in the work place.  I found one extremely inspiring and one, despite really looking forward to reading and being endorsed by a number of outspoken feminist celebrities, really disappointed me.

Sheryl provides practical suggestions for managing and overcoming the challenges that arise on the “jungle gym” of career advancement. I nodded my head in agreement and laughed out loud as I read these pages. Lean In is a superb, witty, candid, and meaningful read for women (and men) of all generations. – Condoleezza Rice, Former U.S. Secretary of State

I’ve recommended this book over and over and you really should make the time to read it. The premise is simple, instead of letting up on the gas and choosing to step back at a point in your career to allow for personal or family pursuits, Sandberg encourages women to put their foot down. The reason is simple – the second women start to let up, they decrease their options. This is such an important message both for women as well as men and I’ve recommended this book both to fathers and men in university and in their 20s. It can really make a big difference in the support they offer for their partner. I also recommend to check out leanin.org.  There are local community groups for like-minded woman as well as help for men on how to be a lean in dad, how to be a 50/50 partner or a workplace MVP.

It is saddening that the problems described in [Feminist Fight Club] persist, but Bennett’s light approach and humorous neologisms make fighting the power a lot more palatable. –Publishers Weekly

I must say, I found this book a bit offensive. I’m quite positive it truly does mean well, but the cartoon, quirky nature makes light of what can be quite a serious situation. I had issue that some serious topics such as pay inequity, maternity leave and sexual harassment aren’t broached. I feel this really speaks down to women and was really a missed opportunity. On Amazon I gave it a 2/5 as there were a couple tiny practical nuggets however largely a bit too trivial and really can be summed up with ‘don’t be afraid to speak up.’ Perhaps if I were younger and a  a business student at university or perhaps in my first job it might not be quite as condescending. The one message I found quite powerful was that women need to support other women in the workplace. I couldn’t agree more and it really harks back to my personal confusion of those women who vote for Trump, and in doing so, I feel, are not supporting other women. What’s a bit of a shame, however, is most of the book seem to treat the sophomoric behaviour of males around them as the enemy, and in reality its both. I’ve seen just as many women cut down other women.

If you are feeling in need of some more inspiration by strong women, here are a few other reading recommendations:

If you have children

And to all the little girls […], never doubt that you are valuable, powerful, and deserving of every opportunity in the world and every chance to pursue your own dreams. –HRC, 2016 concession speech

If you have any other professional or personal recommendations, please share them in the comments below!

This site uses Akismet to reduce spam. Learn how your comment data is processed.